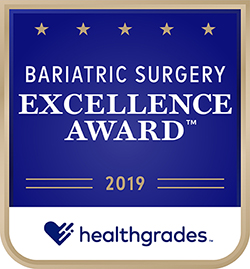 San Antonio, Texas (January 4, 2019) – Bariatric Surgery at Foundation Surgical Hospital of San Antonio is among the top 10 percent in the nation, according to a national study by Healthgrades, the leading online resource for comprehensive information about physicians and hospitals. This achievement is part of findings featured in the Healthgrades 2019 Report to the Nation, which found that clinical performance continues to differ dramatically between hospitals regionally and nationally. Every year, Healthgrades evaluates hospital performance at almost 4,500 hospitals nationwide for 32 of the most common inpatient procedures and conditions, as well as reporting on outcomes in appendectomy and bariatric surgery using all-payer data provided by 15 states and the District of Columbia.*

“With so many choices for care, consumers often find that their health journey can be difficult to navigate,” said Brad Bowman, MD, Chief Medical Officer at Healthgrades. “Information about hospital quality is helpful as they make decisions for their health, and Foundation Surgical Hospital of San Antonio has distinguished itself as an exceptional organization for Bariatric Surgery.”

* Statistics are based on Healthgrades analysis of All-Payer data for years 2014 through 2016 and represent three-year estimates for patients in 15 state and the District of Columbia for which all payer data was made available.

“It was the greatest experience ever at a hospital. I had no complaints, great food, and a outstanding staff to make sure I had everything I needed. I would truly recommend this hospital and it’s staff.”

“Best hospital in town and everyone is fantastic. They actually care about you and how you are feeling.”

“The nurses were awesome and very caring!”

“By far the best hospital stay ever! Thank you for paying attention to the small details!”

“Since this was my first experience in hospital, the staff were extremely helpful and friendly which eased my nerves. They went above and beyond so that I wouldn’t be scared.”

“I had my surgery here. They were wonderful. The doctor’s and staff are so friendly and helpful. If you have to have surgery this is a great place.”

“Great services. Very professional. I would recommend this hospital to everyone who considers getting bariatric surgery.”

“Was treated respectfully from beginning to the end.”

“I like the small size of the facility with the large number of staff to take care of the patients.”

For your safety and the safety of others, please review our updated visitation, Covid-19 policies, and vaccination.